This search form uses an instant search feature. As you type, search results will appear automatically below the search field. When you've entered you desired search terms use tab to navigate through the available results and hit enter to open the selected page or document.
EDIT LEFT

If you know a former Pirate deserving of recognition for his or her athletic contribution to the school, please use one of the forms below to submit the nomination to be considered. Remember that nominees can be coaches, players, or friends of Pirate athletics. Nominations can be submitted at any time. 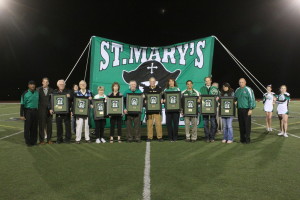 The St. Mary’s High School Athletic Hall of Fame exists to ensure that the history and tradition of the school, as well as the contributions of individuals, are celebrated. Its purpose is to honor, pay tribute to, and perpetuate the memory of individuals who, either through participation, support or interest, have made outstanding contributions in the field of athletics and helped St. Mary’s High School in its pursuit of integrity and excellence.